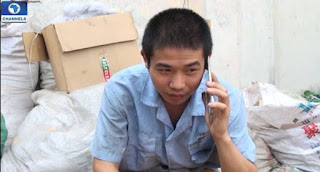 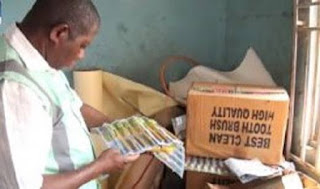 The Managing Director of Bendusco International Agency Limited, a manufacturing outfit in Onitsha, Mr. Benjamin Nwizu and a Chinese working for him, Mr. Ning Tiadong, are in the net of security operatives for faking products of other companies.

They were arrested when our officials and the security operatives, comprising the army, police, Department of State service operatives, the civil defense, among others, raided his company located along the Onitsha-Owerri expressway in Onitsha.

Nwizu, the managing Director on sighting the security operatives claimed the roof of the two-storey building and attempted to jump into the nearby compound, but was forced to come down by soldiers who threatened to bring him down by force. The Chinese, who claimed that he did not understand English language, said he was in the company to effect a repair of one of the machines in the company.

The company’s workers, mainly girls between the ages of 18 and 20 ran in different directions as the security operatives moved into the various offices housing the manufacturing outfit. Some people, who claimed to be in the company for other businesses at the time of the raid, as well as workers were however allowed to go after questioning.

Among the products being adulterated by the company were tooth brushes and shaving sticks, labels of other brands, including life Beer, Panadol among others, also littered the premises of the company which was an indication that the company was also involved in printing of such labels for those who adulterated other people’s products.

SON Director of Operation Egnr. Felix Nyado who led the operation said the organisation had made several attempts to prevail on the company to adhere to the standards, adding that all the efforts fell on deaf ears.

But Nwizu claimed that his company had an order from the National Assembly restricting SON from disturbing its business, arguing that the products he was manufacturing were duly registered.

However, the Director said the manufacturing outfit specialized in producing counterfeit tooth brush handle, insisting that the product was expected to be made with virgin raw material.

He said, “The act establishing SON allows us to advise companies to adhere to standard specifications but if a company consistently violates the advice, the organisation has the power to stop the circulation of the adulterated product. We have therefore evacuated the fake products found here and sealed up the place to stop further manufacturing of substandards products “SON visited the company in 2014 and wrote an interim report about the products and all effort to get the owner of the company to comply to with the standards were met with resistance.

He is here claiming that he had a court order to restrain SON from stopping him, but no court can grant any company an order to continue to manufacture substandard products and stopping SON from carrying out its statutory duties.
The regulation body is not doing the job for itself. Rather, its concern is to protect the life and safety of citizens an ensure that businesses are conducted in the right way. And if a company decides not to conduct its affairs within the regulatory framework of the authorities, then the owner should go to another country to operate. As it is, this company is under investigation and we want to know what is giving him the audacity to challenge a regulatory agency.

Nyado described Nwizu as serial liar adding that he should explain to security operatives where he got the power challenge a constituted authority.