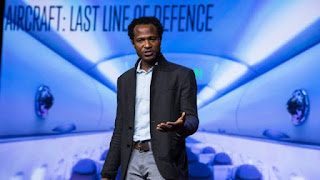 At the TEDGlobal conference held in Tanzania, a Nigerian invented a computer base mice neuron chip that can smell explosives. Oshi Agabi who invented the chip lives in the US and has a startup firm called Koniku Kore, which he named after the chip.

He started the firm a year ago and since then has succeeded in having seed funding of $1 million (N315 million) and has also earned profit worth N10 Million from clients in the security industry. According to him the chip can not only smells explosives but can also be used to “replace traditional airport security.”


When interviewed by BBC, Agabi said “Biology is technology. Bio is tech,” he says. “Our deep learning networks are all copying the brain.”

“You can give the neurons instructions about what to do – in our case we tell it to provide a receptor that can detect explosives.”

“This device can live on a desk and we can keep them alive for a couple of months.”

“The idea of mimicking silicon is very hard and we don’t think it can be scaled.”

During his presentation, Mr.Agabi, showed the prototype of the chip in a video but do not revealed it publicly. The chip may be used on robots in the future.