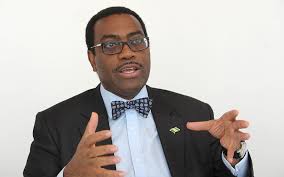 In the press briefing on Monday and in respond to Journalist questions regarding Nigeria recession, Africa Development Bank AFDB president Akinwunmi Adesina claims that recession in Nigeria is a problem of revenue concentration.

Mr. Adesina said that the Board of Directors of AFDB recently approved US $1 billion support for government to reforms in agriculture, power and budget. In the case of private sector, he said that the bank is also giving loans to money deposit banks to grow the private sector. According to Adesina, the African Development Bank will continue to support Nigeria towards improving its macro-economic policy and creating an enabling environment for foreign investment.

He further said “African agriculture is not creating wealth as a result of heavy dependence on import. The Bank will increase its lending to agriculture in order to end extreme malnutrition, support processing and export of finished goods, create jobs and wealth.”

Speaking about the measures taken to boost security on farmland, The Honourable Minister of Agriculture, Audu Ogbeh said that The Ministry of Agriculture has been working with the Civil Defense Corps through the Ministry of Interior to safeguard the lives of farmers on the field. He underscored the positive impact that opportunities presented by agriculture and agri-business are having on youth, citing real-life examples of youth seeking livelihoods in agriculture, rather than going down the path of crime or extremism.

The Honourable Minister also confirmed to the press that the Global Economic Prospects (GEP) initiative is still running, but facing challenges with counterpart funding from states. The Federal Government, he said, is working to bridge those funding gaps. He urged his fellow Nigerians to “eat what we grow and grow what we eat.”

Addressing the press, Abdalla Hamdok, Acting Executive Secretary, ECA, underscored the importance of agriculture in Africa’s transformation, adding that its industrialization is key. He urged both the public and private sectors to “tap into regional integration and value chains in order to access global value chains; think and operate at scale and tap into the expertise of China, India and Brazil.”

President Adesina ended the press conference with a call to action, warning that the continent drew a staggering food import bill of US $35.4 billion in 2015, with about 15 food imports of which the top 5 are staple commodities such as wheat, sugar, rice, beef and soybeans. The value of these imports is projected to increase to US $111 billion by 2025, he said.

“We need to harness the potential of agriculture in order to convert our rural area.”