The OnePlus 5T flagship has been getting a lot of leaks recently that its cut my attention. Its probably be launched this November, precisely, 16th of November. The phone seems promising as it will come with the latest Android operating system Android 8.0 Oreo. Which was rear on most flagship phone from popular smartphone manufacturers except for Huawei Mate10 and Google Pixel2.

The OnePlus 5T isn’t going to be just any flagship smartphone as it will be parked with a powerful hardware chip set from Qualcomm. That is, Qualcomm snapdragon 835. The Graphic Processing Unit, GPU, is the Adreno 540. And a processing speed of 2.45 GHz.

It camera also follow current trend-that is dual rear camera. According to the leaks so far the cameras are 20MP each. The internal storage is another interest specification of this device. A 8GB RAM is really not bad at all followed with a 128GB ROM. This smartphone is really the boom if the leaks becomes so.

Well looking at the design, it is expected that the OnePlus 5T and its twin OnePlus 5 will be 6 inches in screen size, on a quad HD display with a resolution of 1080 × 2160 PPI. The gadget will certain be a bezel-less smartphone. It aspect ratio is the regular 18:9 which is common for all non-bezel’s phones.

On launch date, it is expected that the OnePlus 5T should look like the one in this photo. 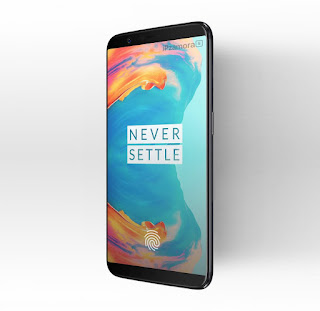 This photo reveal an embedded fingerprint scanner in the front view of the device. This will be a lovely feature form a phone from China tech company.