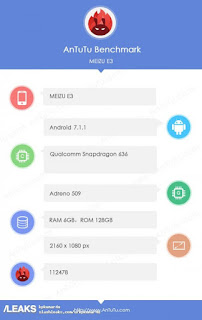 Some basic specifications and hand on photo of the Meizu E3 was reported few days back. Antutu benchmark report confirmed these specifications. Making the previous leak reliable.

According to the source, the system of chip was similar with the previous leak which states a Qualcomm Snapdragon 636 with a GPU of Adreno 509. The Operating system of Android 7.1.1 Nougat was also confirmed by the Benchmaker.


The screen resolution was reported as 2160 × 1080 pixels. The internal storage space of 128GB ROM is expected however, a RAM of 6GB is reported by Antutu benchmark.