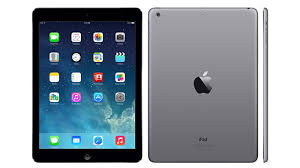 Apple iPad Air was announced in October 22, 2013 and was released on November 1, 2013. The Apple tablet is the fifth generation, of was preceded by the fourth generation of iPad and was succeeded by iPad Air2. The device was one of it’s kinds as at the period it was produced by Apple. It comes in two variants. Variant 1 is for only Wifi while variant2 is for both wifi and cellular network. Apple has generally stopped the production of this tablet, although, it can still be found in the market. You can buy it within the price range of N200,000 and N300,000 in Nigeria.

The gadget comes with a system-on-chips from Apple A7 with 64-bit architecture and a processor of Apple M7 motion co-processor. The battery capacity is at 8,827 mAh. The built-in battery has the capacity to last for ten hours while browsing via WiFi and nine hours if you perform the same task via cellular network.
< It also comes with various built-in apps and free apps. Some of the built-in apps are Safari, Camera, Photos, iBook, Game centers among others. Some of the free apps are Page, Numbers, Keynotes, iMovie and more.

READ ON  Apple inc is facing another lawsuit, this time on Animoji
Powered by Inline Related Posts

The external features of the gadget includes the retina of size 9.7 inches in diagonal. The Home button at the buttom of the retina as well as the 1.2 MP front facing camera. At the top corner of the device, close to the front camera is the 3.5mm stereo headphone jack, Dual microphones and on/off sleep/wake button.

The bottom corner, close to the Home button, you will find two built-in speakers as well as lightning connector. Furthermore, at the right hand corner is the volume on/off button as well as the silent/screen rotation lock button.

Colours: It has two colours Space Gray and Silver.

READ ON  Apple iPhone 3GS, This is were S stands for Speed
Powered by Inline Related Posts

Operating System: It currently run on iOS8 upgraded to iOS10 and now you can be upgrade it to iOS11. Chipset is Apple A7 chip with 64-bit architecture with Embedded M7 coprocessor. CPU of 1.4 GHz dual-core 64-bit ARMv8-A. And a GPU of PowerVR G6430 series.

Camera: The rear camera (iSight) has 5 megapixel camera with Autofocus and F/2.4 aperture. The front facing camera has 1.2MP camera with F/2.2 aperture and Retina flash.

Apple to ditch Intel Chips, Starts making its own for it’s Mac Computers in 2020