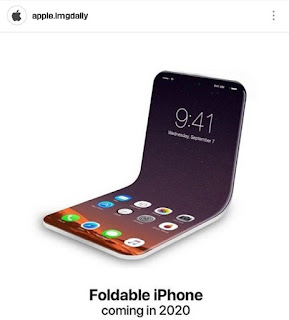 A report from IG shows that Apple may launch a foldable iPhone in two years time. This is not a new story. A previous post from here, shows same. But the thing is, Samsung also plans launching a foldable smartphone, named Galaxy X. But the tech giant is yet to do so.

Samsung has in the past three years reported a possible Samsung Galaxy X but has not yet launch it. Some expert claimed that the possibility of manufacturing an android phone that bends is not viable since the OLED display for such kind of smartphone is not yet invented.

However, Apple has claimed it will produce a iPhone that bends in 2020. The folding smartphone will be the latest in smartphone evolution. Current technology are smart camera with Artificial Intelligence, Machine Learning on Google Assistant, Siri, notch on smartphone screen and more.

2019 iPhone XI has three cameras packed in a square