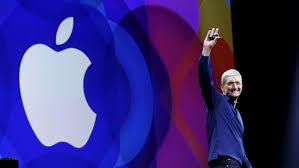 Apple stocks have hit $800 billion in the Q2 report. If Apple continues this way, it’s shares may hits 1 trillion after it released it’s flagship smartphone the iPhone 8. Apple will be using the iPhone 8 to celebrates ten years of manufacturing the iPhone series. Its commence production of the phone since June 2007.

Apple financial report, as posited by Techcrunch, sent it’s share up to 5 percent increase instantly. Apple shares has risen by 30 percent before the released of its financial statement.

Apple will be launching it new flagship headset this September. This may further trigger increase in it’s shares. Techcrunch is predicting that Apple shares may hit $1 trillion in the fourth quarter of 2007.