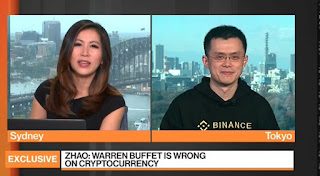 BiFinance, a cryptocurrency, platform in Hong Kong and Tokyo has reaches 5,000,000 users in counting. The record shows willingness by people to accept this new means of payment that still battles its way to become legal tender.

As a result, the CEO of BiFinance, Changpeng Zhao, was interview in Blomberg TV. He argued against what the bear cyptocurrency user warren Buffet said regarding bitcoins on Blooberg. Changpeng Zhao said Warren Buffet was wrong.

He also talked about the future of BiFinance and cryptocurrency. Earlier, Warren Buffet has stated on Blomberg that cryptocurrency will come to a bad ending. While a Wall Street strategist and a bull on cryptocurrency, Tom Lee, said that Bitcoin will double in 2018.