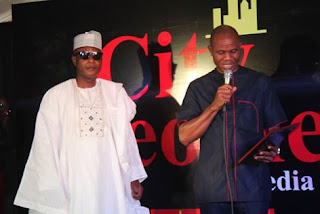 Photo of many giving a speech at the award night

Among the Ministries, Departments and Agencies, MDAs in Nigeria, The Economic and other Financial Crime Commission EFCC, on Sunday was given the award as the most effective government agencies in Nigeria by city people for excellence award.

The Economic and Financial Crimes Commission today Sunday 2nd April 2017 received accolades as the most effective government agency in Nigeria, for the year ending 2016. This was the judgement at the 20th City People Awards for Excellence held at the B Event Centre, Lagos Airport Hotel, Ikeja, Lagos.

While receiving the award, the Acting Chairman, Ibrahim Magu who was represented by Head Media and Publicity, Wilson Uwujaren, thanked the organizers for the gesture while dedicating the award to all Nigerians who one way or the other are at the receiving end of corruption crimes effects.

Magu reiterated that ”this award not only serves as encouragement in our determined efforts to bring to book all those who have brought our economy to a sorry state through their corrupt acts, but also as a commitment to supprting the President Buhari’s fight against corruption.”

The City People Awards which debutted in March 1997, has become one of the respected glamorous awards in Nigeria.Its purpose over the years has been to reward individuals and corporate bodies who have excelled in their various fields.

This has in no small measure encouraged individuals and corporate bodies to put more zest into their jobs with the resultant development of the nation politically, economically and socially.