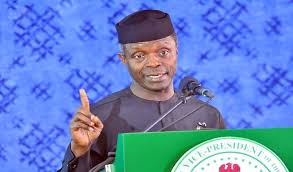 The Federal Government of Nigeria is planning to work with illegal oil refiners in the Niger Delta region of Nigeria. The information come up Tuesday while the Acting President of the country, Professor Yemi Osinbajo declared this when speaking residents of Port Harcourt, Rivers state.

The Ag. President said it is necessary for the Federal Government to work with illegal oil refiners in the Niger Delta. He believes that it will result to peace in the region.

The Niger Delta region has faced treat from militant, vandalising oil pipelines. This has resulted to low output per barrel of crude oil per day. Read Also, The issue of PMS price hike and scarcity in Nigeria.

“Our approach to that is that we must engage them (illegal refiners) by establishing modular refineries so that they can participate in legal refineries. We have recognised that young men must be properly engaged,” he said.

He further said that efforts will be made to resumed payment of amnesty and to provide jobs  for those who lay down their arm during the 2009 amnesty that was granted that year.

He said that the amnesty was discontinued to end corruption. Regarding this he said,  “We have made more provisions for amnesty and provisions for social intervention.