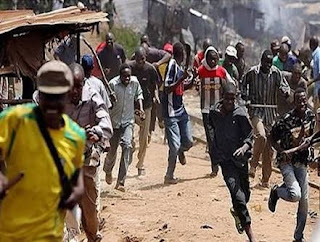 The chairman of the local government’s interim management committee, Mr. Alexander Iya, who briefed newsmen on the incident, said that the gunmen raid the village around 6 a.m and lunched a massive attack on the villagers.

Mr. Iya said that majority of the victims were women and children, whose corpse he’d been deposited at the Kafanchan General Hospital for treatment.

He said that the Gunmen also burnt many houses and destroyed crops.

Mainwhile, as reported by News Agency of Nigeria, Many of the invaders was killed by security personnel deployed to contain the situation.

The chairman has appealed to the people of the village to remain calm and avoid the temptation to take the law into their hands.

He assured them that government had deployed enough personnel to secure the communities.

Although efforts was made to contact the Divisional Police Officer of the area which was not successful, a military staff deployed to curtail the situation described the attack as “very serious.”

Read Also, Prayer To Buhari, About 65,000 Christians in Katsina State To Pray for him.