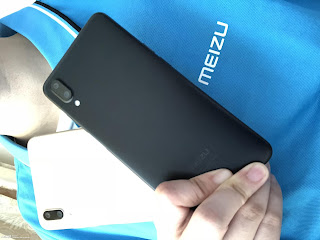 Meziu E3 may comes in white and black colours variants as today’s report revealed. The phone also shown two cameras at the rear view of the smartphone. A single LED flashlight was also revealed in the photo. The phone will have a metallic back as the photo unveiled.

A popular source revealed that the smartphone will be 6 inch screen in diameter. It will be packed with Android 7.1 Nougat and a Qualcomm snapdragon 636 chipset. It will have a single processor with 8 cores and 1.8 GHz Kryo 260. And a Graphic Processor Unit of Adreno 509. With a battery capacity of 3300 mAh.


The two rear cameras has lens size 20MP and 21MP. But the front camera is 8MP. Back to the memory, the chipset has the ability to power 6GB RAM and 4GB RAM variants that Meziu will made available for the smartphone. Also, an internal memory of 128GB ROM will accompany the 6GB RAM. But, there is an alternative internal memory space of 64GB or 32GB for the 4GB RAM.