The HTC U11 Pro is yet to be launched. However, the smartphone specifications have been leaked. Here, are the leaks so far:

Evan Blass was one of those who provided the leaks of this gadget. This is the photo.

According to him, the HTC U11 will has a Chip set from Qualcomm snapdragon 835. The screen will be 6 inches on a WQHD plus LED display at 538 dpi. The rear camera is 12MP with f/1.7 with LED flash and 8MP front camera.

The internal memory is 4GB RAM and 64GB ROM and/or 6GB RAM and 128GB ROM. The battery capacity was placed at 3930 mAh. It will also has a water and dust resistance with a rating of IP68.

I will go with Evan Glass, not because he is a popular and more accurate revealer of leaks of smartphone but because, to me HTC will not go for a lesser SoC if it really want to compete with other flagship in the US consumer market.

This is the photo from Geekbench. I also got it from /Leaks. 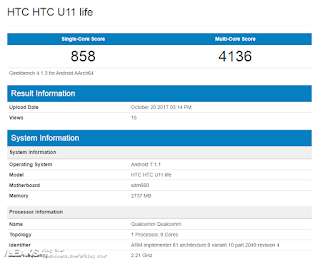 Geekbench info also showed that the gadget will come with an operating system of Android 7 Nougat. It will has one processor and Octa cores. It will run on 2.21GHz and 81 bit architecture.

READ ON  An Unnamed Infinix Smartphone is ready for launched tomorrow with Android 8.0 Oreo
Powered by Inline Related Posts

Furthermore, photos of the HTC U11 Plus revealed that there will be a fingerprint scanner at the rear of the flagship. It also has a small bezel. The date of launch is also known and it will be November, 2nd 2017. But the venue for the launch is not known for now as well as the price. 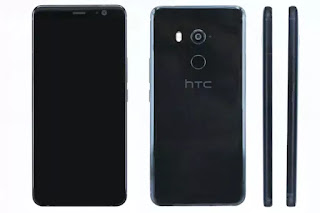