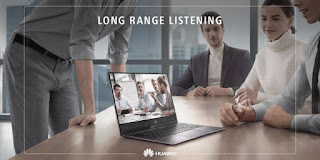 Huawei, on the Mobile World Congress, MWC, had announced its latest lineup on laptops, the Huawei Matebook XPro. The laptop will be the first of its kind to have a bezel-less display. With an approximately 91 percent screen to body ratio. The smart device also has touchscreen capacity and a keyboard. With a 3K resolution the XPro Matebook exceeds Retina level display for clearer and brighter view.

The Huawei Matebook XPro combines a metal uni-body design with a sandblast for contemporary finesse. It comes in Space Gray and Mystic Silver colours, it is indeed a “thing of beauty.” The way it is designed, including its light weight, makes it convenient to move from one place to another.

The system on chip of the Huawei MateBook XPro is 8tg Gen Intel® Core™ i7 for faster performance and more fun. It also uses the Window 10 operating system. The laptop is not only for work but also for entertainment. It has quad speakers, double bass and double treble for all-round powerful audio.

One interesting feature is the fingerprint sensor with the ability to turn awake in 1.9 seconds, so you can start your tasks in no time. It has one USB-A, two USB-C and a headphone jack. With its wireless sharing feature, it is possible to synchronized your mobile phone, PC and Tablets and share data among the devices. Finally, it has four inbuilt microphones.

Speakers for the launched was Richard Yu, CEO, Huawei Consumer Business Group and Kurt Petersen, GM Global Devices Partners of Microsoft. Mr. Kurt reveals the benefits of the Windows10 system on the Huawei MateBook XPro. One of such is the Microsoft Optimised Translator which can translate instantly across multiple languages.

The Huawei Matebook XPro is really a slim laptop readily available for your conveinence.