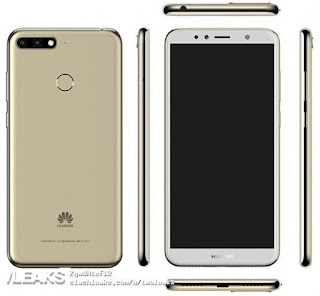 Huawei Enjoy 8E Photo by /Leaks was reported yesterday. The front of the device revealed a single camera, flashlight, proximity sensor and speaker which is found top of the front view. The proximity sensor is closer to the camera while the flashlight is place at the right of the speaker.

There is no button at the front view, so, the device is fully a touchscreen smartphone. The screen has a huge bezels which is very uncommon on most smartphone launched this year. Even the ESS expensive Tecno Canon CMore has tiny bezels.

The left corner of the smartphone is blunt. But the right corner is were the volume button, sleep/wake button and the sim tray is located. At the top corner, the 3.5 inch earpiece jack can be found while at the button corner, you will found a two speakers and USB port in between the speakers.

For the specifications, the screen size was reported to be 5.7″ with a resolution of 1440 × 720 pixels. The system on chips is the snapdragon 430 a very old Qualcomm Chipset. The internal RAM is 3GB, but the ROM is stated to be 32GB. For the rear cameras, 13MP and 2MP dual rear Len were placed horizontally as stated earlier.

A further 5MP camera is inscribed at the front view of the Huawei Enjoy 8E. It is expected to have a 3000mAh battery juice. Android 8.0.0 operating system is also expected to come with his smartphone. A dimension of 152.4mm × 73mm × 7.8mm and a weigh of 150g. The price of the smartphone is placed at 1099 Yuan and it is expected to be available starting March 30.