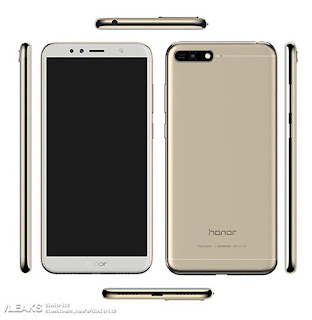 Huawei Honour 7A photo in 360 view, basic specifications, price and launch date is out base on sources online. The Huawei Honour 7A is expected to come with a 5.7″ screen size. The resolution revealed by the source is a 1440 × 720 pixels. However, it will weigh 150 gram. A length of 152.4mm, wideness of 73mm and thickness of 7.8mm is expected from this Honour 7A.

The Battery capacity of the Honour 7A was posited to be 3000mAh according to he source. For the performance, the Phamblet will not use Huawei Kirin chipset. Instead a Qualcomm Snapdragon 430 will be inbuilt. An internal RAM of 3GB is will be attached to it. Also a memory size of 32GB will also come with the smartphone. These revealed that the phone will be a middle range smartphone.

For the operating system, the latest Android OS, 8.0 Oreo will be on the device. As for the price, an expected price of 1499YUAN which will be NGN68,000 approximately. The Huawei Honour 7A is expected to be launch on 30th of March this year.

A second look at the photo especially at the bottom, is the USB port in between the two laud speakers. Possibly, the USB Type-C. At the top of the phone is the Earpiece port. While the right corner has a volume and power button. The phone may not come with a fingerprint scanner at the rear of it.