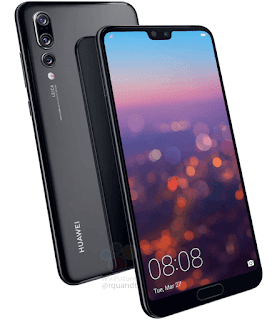 Huawei P20 series has it proposed launched date fixed at March 27 this year. The smartphone will be Huawei flagship set of device. The Huawei P20, P20 Lite and P20 Pro photos, specifications and other features had been reported several times by tipstars his year.

That question may be answered soon by Huawei itself. Possible at the Launch of the flagships. For the P20 Pro, it will have a 6.1″ screen. But the Samsung Galaxy S9 Plus has a 6.2″ screen. A FHD and OLED display is inscribed below the screen of the Huawei P20 Pro.


The three rear cameras of the Huawei P20 Pro are 40MP, 8MP and 20MP accordingly. Roland Quandt stated in a media post that the 40MP sensor will have a hybrid zoom, the 8MP camera is a telephoto Len with 3X zoom while the third camera a 20MP Len will capture image in monochrome form which means that the image snapped will appear in gray. The three camera has a single LED flashlight.

Battery capacity of 4000 mAh will follow the Huawei P20 Pro. USB Type-C port, Android 8.1 operating system. It is expected to weigh 174g. And will be sold in Europe for 899 Euro. The chipset is Kirin 970, a RAM of 6GB RAM and 128GB ROM all with Light Fusion rear shooter. Finally, there is a fingerprint scanner at the rear of he Huawei P20 Pro.