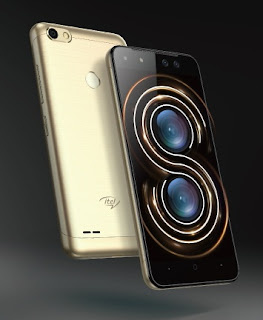 The Itel S12 features is stated below. Moreover, the phone is made specifically for users to enjoy selfies. If you love selfies, this phone or its younger brother Itel S32 may be useful. The soft flash light attached to the dual front camera ease taking selfies photos even at night. The smartphone also comes with a fingerprint scanner. The fingerprint scanner serves three purposes; to unlock the phone, answer calls, take photos or record video and quick lunch app. The price for the Itel S12 ranges from 25,000 to 28,000.

Specifications of the Itel S12

Hardware
The chipset is from Mediatek (Mediate 6572). It’s CPU is 1.3GHz quad core. The GPU information not available.

READ ON  Tecno S1 review, price and one of the lowest budget phone ever
Powered by Inline Related Posts

Camera
The rear camera is 8MP with LED flash while the front camera is 2MP and 5MP with soft flash.

Battery
The battery capacity is 2,400 mAh.

Network
There is a 2G and 3G network.

Connectivity
There is WIFI connection, Bluetooth 4.0 and dual sim card.