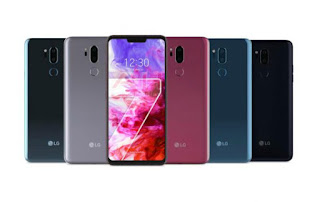 LG by itself, leaked its LG G7 ThinQ flagship smartphone. The OEM, will be launching the flagship on May 2 and May 3 in New York and Seoul respectively. This was stated by LG Electronics managing director, Jeong Wook Ha.

Though the specifications of LG G7 ThinQ was not stated. The MD mentioned that the flagship smartphone will use LG’s AI technology. This tech was old LG’s smart home appliance and it is coming to it’s Smartphone. LG first brought it to the V30S ThinQ last month.

Voice AI, Empathy AI and Sympathy AI are among the AI classification for the G7 ThinQ flagship. And as seen from the photo above, the LG G7 ThinQ almost resembles the Samsung Galaxy S9 Plus, although the two rear cameras edges are curved more than the Galaxy S9 Plus. The screen notch is also noticeable.