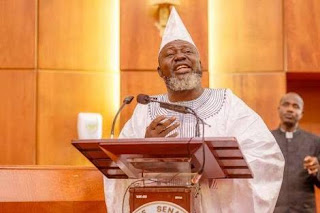 The cyber attack issue is no longer news in Nigeria has government and news agencies has continue to create awareness regarding the issue. In his welcome address at the Nigeria ICT Impact CEO forum 2017, held in Lagos at Oriental Hotel in Lekki, the Minister of Communications, Barr. Adebayo Shittu, warn Nigerians to be safe from cyber attacks and internet criminals. “I want to encourage us to stay safe and don’t be an easy target of Cyber-attacks and internet criminals,” he said.

The event was organised by ICT Watch Network, with the theme: “Broadband Access: The Challenges of Cybersecurity Threat and Effect of Social Media Era.” According to Shittu, cyber attacks do not only occurs in Nigeria but also in the United States and globally; and most cyber attacks are fueled by North Korean.

In the forum, Barr. shittu said, “Only last month, we were an alerted by the United States security agency concerning North Korean hackers and current cyber threats and campaign. It goes without saying that cybersecurity has become a top National concern for most Governments round the world. This has been due to the unprecedented rise in the number of cyber attacks and campaigns recorded globally with North Korea being one of the topmost instigators of the cyber war fare.”

“Few months into the year, there have been an inordinate number of cybersecurity meltdowns. These attacks range from corporate breaches to viral, state-sponsored ransomware, leaks of spy tools, and full-on campaign hacking.  According to the alert, the Lazarus Group has been using DeltaCharlie to target “media, aerospace, financial, and critical infrastructure sectors in the United States and globally.” The alert also highlighted technical details about hacking tools which “cyber actors”  have used to target Critical Infrastructure both in private and public sectors in the United States and Globally.”

“Cybersecurity is more than a challenge for Government as it poses a huge obstacle to our Digital transformation/Digital Nigeria agenda in social and economy desired for the country. The Federal Government has estimated an annual loss of over N 127 billion to cybercrime activities in the Nation.”

“Nigeria has had its fair share of cybercrimes between 2016 and 2017 alone. The recession in 2016 brought about numerous attacks targeted at organizations and individuals. The most  recent targets where on unsuspecting patronizers of ponzi schemes. In the wave of austerity many people lost money to the said schemes and others fell victims to malicious and compromising websites, this cannot continue.”

The Nigeria Communications Commission, NCC which is under the umbrella of the Ministry of Communications has gave several warnings of cyber threats and has also gave out instructions to deal with such cyber crime.