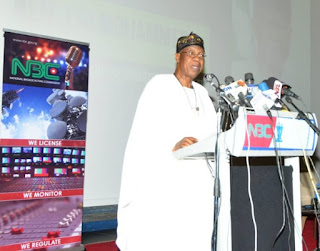 It seems that it is not only the army that is directed by the Federal Government to deal with hate speech in Nigeria. There is also a directive to the National Broadcasting Commission (NBC). This is exactly what the Minister of Information and Culture, Alhaji Lai Mohammed, said in a speech at the 3rd Annual Lecture Series of the NBC, which also coincides with the 25th Anniversary of the Commission.

He told the commission to sanction any radio or television station that broadcasts hate speech. He said, “As a matter of fact, the challenges facing the NBC have never become more daunting, considering the increasing propensity of some radio and television stations across the country to turn over their platforms to the purveyors of hate speech. It is the responsibility of the NBC to put these broadcast stations in check before they set the country on fire.
“As the NBC celebrates what is a milestone – a quarter of a century – in its existence, I urge the Commission to redouble its efforts in discharging its mandate. The NBC must ensure a strict adherence to the Broadcasting Code, and errant stations must be sanctioned accordingly to serve as a deterrent. The nation looks up to the NBC to restore sanity to the broadcast industry. The Commission cannot afford to do any less at this critical time. It cannot afford to fail the nation,” he said.

Alhaji Mohammed, who cited the ignominious role played by a radio station in fueling the genocide in Rwanda in 1994, which led to the loss of over 800,000 lives in 100 days, charged the NBC not to allow the purveyors of hate speech to lead Nigeria to the path of destruction.

“If you tune into many radio stations, for example, you will be shocked by the things being said, the careless incitement to violence and the level of insensitivity to the multi-religious, multi-ethnic nature of our country. Unfortunately, even some of the hosts of such radio programmes do little or nothing to stop such incitements. Oftentimes, they are willing collaborators of hate speech campaigners.

This must not be allowed to continue because it is detrimental to the unity and well-being of our country,” he warned.

The Minister re-echoed the recent position of the Vice-President, Prof. Yemi Osinbajo “that it is the resolve of the government that none will be allowed to get away with making speeches that can cause sedition or that can cause violence, especially because when we make these kind of pronouncements and do things that can cause violence or destruction of lives and property, we are no longer in control.”

Nokia 3 now available in the UK

Get N4,000 from Etisalat when you start using your old sim card