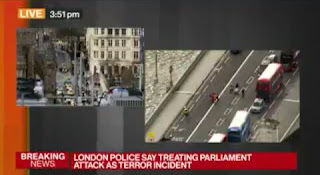 Media reports shows that there was occurrence of multiple gun shot near the Britain Parliament at Westminster, London. Also, a policeman beside the fence of the parliament was stab. It was also reported that a minimum of two persons was short dead. Additionally, people were hit by a car.

According to Blomberg, a car drove down the Westminster bridge, went straight to a fence outside the Parliament and a man ran through the gate and security with a knife and stab a police officer and was shot immediately.

The attack has been taken to be a terrorist one by the police.

The leader of the House of Common, David Lidington said: “What I’m able to say to the house is that there has been a serious incident within the estate. It seems a police officer has been stabbed, that the assailant was shot by armed police.”

As a result of the incident, a meeting scheduled to hold today by the British Prime Minister Theresa May with Prime Minister of Luxembourg, Xavier Bettel was cancelled.
READ ON  Facebook still Searching For ways to Deal With Fake News
Powered by Inline Related Posts

The London Police also gave out a warning that people should avoid areas closed to Westminster such as Whitehall Westminster Bridge, Lambeth Bridge, Victoria Street up to the junction with Broadway and the Victoria Embankment up to Embankment tube.