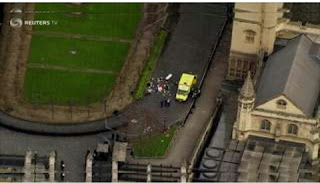 The names of the policeman stabbed along with the attacker who was shot dead on the scene immediately had been identified. The police officer name is Keith Palmer and the attacker’s Khalid Masood.

The policeman was not with arms at the time of the incident. He his married and have a daughter of age five. The family in a statement said Palmer will be deeply missed. ‘We loved him so much’, they said. Also, the Parliament headed by the Prime Minster, Theresa May, observed a minute of silence for the dead.

On the other hand, the attacker who is associated with the Islamic States, a well known terrorist sect, is age 52 and he is a British citizen.

According to Reuters, the Police claimed that Khalid was not under investigation for terrorism and he was convicted first in 1983 for criminal damage and then in December 2003 for possession of a knife.

The Islamist Jahadist group had taken responsibility for the attack..

The Nigerian President has also Sympatize with the country and said that all countries should come together and fight against terrorism.