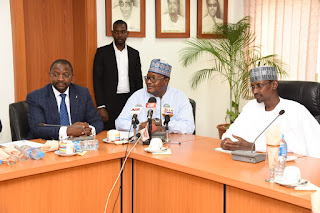 The Executive Vice Chairman of Nigerian Communications Commission, NCC, Professor Kumar Danbatta has meet with Federal Capital Territory FCT minister, Mall am Muhammed Bello to seek strategic collaboration and partnership and to reiterate measures to be taken to bolster quality of telecom service in the FCT.

Danbatta who started his speech by thanking the Honourable Minister for time and reception accorded his team, quickly proceeded to capture the challenges to the provision of robust and qualitative telecom services in the FCT bemoaning the inadequacy of telecom infrastructure in the Territory.

He cited delayed approval by FCT Administration (FCTA) to requests from telecom companies as a key cause of the inadequacy of telecom infrastructure in Abuja stating that some of the requests were made as far back as 2006. Danbatta said “conventionally, developments in capital cities or territories serve as indices for the level of development in the entire nation”. Thus denoting the paradox inherent in FCT being bereft of basic telecom facilities and structures.
Danbatta perceptively narrated evidence-based facts of correlation between ICT deployment and nation’s social and economic development which find clear expressions in the multiplier effect of ICT on all other sectors said that reality speaks to the centrality of telecommunication in our lives.

The CEO of NCC also enumerated quite concretely some of the challenges he referred to including delayed approval for installation of base stations and fibre deployment; absence of collocation guidelines from FCTA; astronomical rise in fees required for building permits; Retroactive FCTA laws that badly affect telecommunications; activities of companies undertaking road construction and repairs with attendant fibre cuts; and attitude towards the implementation of National Economic Council resolution on multiple taxation, levies and charges on ICT infrastructure.