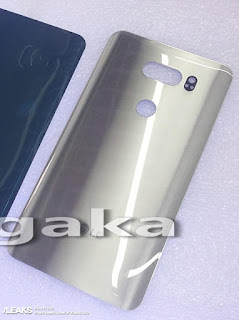 LG V30 is getting more leaks by the day as the day of it’s launched approaches. Earlier, the smartphone was discovered in Geekbench. Now the rear view of it has been leaked at /leaks yesterday.

The rear view photo as seen above render the device to have dual rear camera, a flashlight and  a fingerprint scanner at the rear. Previous leak show that the LG V30 that the device will come with Android 7 Nougat. However, the size of the camera is not yet known to me.

Further, the processing speed is expected to be 1.9 GHz. It’s internal memory is 4GB RAM and the system-on-chip will come from the highly known Qualcomm Snapdragon according to previous leaks. It will also support Google Virtual Reality known as Daydreamer. The date of the release has been confirmed and it will be 31st of August, 2017.
Follow @techwatchngr