Geekbench has released some specification of this upcoming flagship smartphone. And here is it. 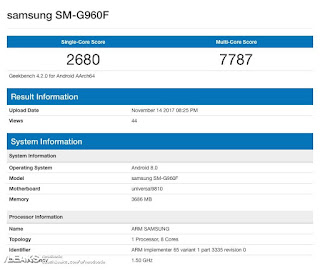 Much as expected, this upcoming flagship will come with a an OS of Android 8.0 Oreo. The Hardware chipset wasn’t provided. However, if you’re familiar with Samsung flagship you know that it will be Qualcomm Snapdragon for the North America variant and Exynos for other locations including Nigeria.

Geekbench called the Galaxy S9 as Model as Samsung SM-960MF. The processor speed will be 1.5 GHz and it will come with Octa core CPU. More leaks is underway.