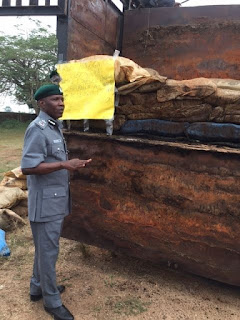 The officials of the Nigerian Custom Services in Federal Operations Unit Zone ‘C’ Owerri continues to succeed in its anti-smuggling drive with the seizure of the items stated above and also a trailer truck with registration number GBB 85 XA suspected to be carrying adulterated diesel petroleum product was also intercepted along Aba-Owerri road.

During an press briefing with newsmen, the Customs Area Controller, Comptroller Mohammed Garba said the suspect connected to the cannabis seizure – James Idoko who claimed to be a student, presented copies of fake customs documents and attempted to bribe Customs operatives with N350,000 for his release.
The cannabis, the suspect and the exhibit of N350,000 were handed over to the Principal Staff Officer (Operation and Intelligence) of the NDLEA Edo State Command Timothy Adewole for further investigation.

The Customs Area Controller “regretted the desire for foreign products by some Nigerians has continued to affect the economy of the country negatively. He called on Nigerians to look inwards as the Government is trying its best to encourage local industries which will in turn create job opportunities for the unemployed.”

“He therefore advised Nigerians to imbibe a greater sense of patriotism in line with “the change begins with me” mantra recently launched by Mr. President by eschewing all acts and conducts inimical to the nation,” he said.