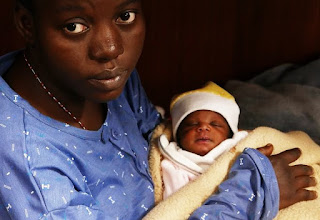 As shown by the picture above, which was downloaded from Reuters. A Nigerian mother and her four year old baby was rescued from the dead sweeping Mediterranean’s sea by a humanitarian volunteers or NGO named Proactiva Open arms.

This four year old baby and her mother were among more than 480 migrants that was rescued by this NGO through a ship on Saturday.

The rubber boats carrying the baby along with other migrants was spotted sinking down on the sea from a distance of 22 nautical miles far north of Libya. The rescue team on the ship moved forward to rescue the migrants. This operation lasted for about three hours.

The migrants were transferred to a former fishing trawler Golfo Azzurro. Mainwhile, the baby mother is 29 years old while the father a Ghanaian is 34 years old.

According to Reuter, the father named Richard Ohene said; “We want to go to France or Germany, there is a future for our family there.”

He decided to go to Europe after they have lived in Libya for two years.