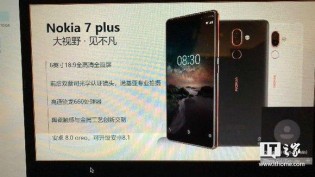 Nokia is planning on launch the Nokia 7 Plus smartphone soon. Rumours this week revealed some basic specification of this smartphone. However, the photo above also showed that the phone comes with an improved bezels unlike it predecessor the Nokia 7. An edge-to-edge is not bad for a middle range smartphone, especially for the Nokia 7 Plus.

Also, a leaked from baidu revealed that the phone will come with a redesigned camera. We all know that Nokia uses Zeiss camera. Nokia 7 released last year only has a single rear camera, therefore, the redesigned camera may be the dual rear camera attached to the Nokia 7 Plus. 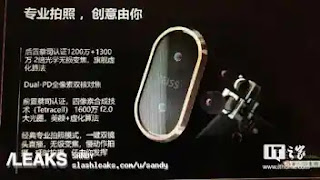 Rumoured Specifications for Nokia 7 Plus

Camera len of 12MP and 13MP zeiss dual rear camera with 2x optical zoom, 16MP zeiss front camera, a chip set of Qualcomm Snapdragon 660. The expected operating system is Android 8.0 Oreo. The screen size will be 6 inch with FHD+ display and an aspect ratio of 18:9. The design will be made partly of aluminum and partly of ceramic.

Though, it is not yet clear where HMD, the producer of Nokia phones, intends to launch the Nokia 7 Plus, but possible places are in China where it launched the Nokia 7 or the Mobile World Congress, MWC, in Spain. However, the photos leaked so far for the Nokia 7 Plus were written in Chinese and were made public over their social media platform Baidu.