One of Nokia flagship mobile smartphone specification was revealed in a live photo on /leaks on Tuesday. The photo which was a sample of Nokia 8 revealed on the screen some internal specs of
Nokia 8.

Though it was rumoured that the gadget will be made available in late July, no information concerning it’s launched and distribution is yet known by us. However, in July 20, CNET confirmed that the Nokia 8 premium was temporary showcase by Nokia in one of their website.
< The features as shown in the photos are 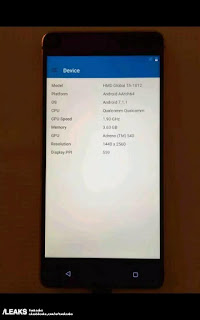 READ ON  Lead Poison in Niger State, 2,500 Children Has Been Affected
Powered by Inline Related Posts