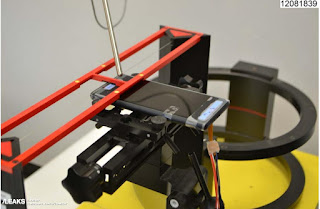 The photo you see was taken during testing of the alleged Sony Xperia XZ2. Previous report from FCC USA reported the Sony Xperia XZ2 to come with a dimension measuring 135 × 65 km. This will make the Xperia XZ2 to be a dwarf smartphone. Possible with similar size with iPhone SE but a little bigger than it.

Other information I gathered from a source, showed that the Sony Xperia XZ will include a battery size of 3000 mAh. Which is quite okay for its size. The chip set will be from Qualcomm snapdragon 845. Coming with an internal memory of 4GB RAM and 64GB ROM; as well as a screen size of 5 inch. This smartphone will be bigger than the iPhone SE with a screen size of 4 inch.

The photo taking during the testing as you can see, revealed that the Xperia XZ will contain bezels at the top and bottom of the screen. Though, the smartphone is reported to has 18:9 aspect ratio, but with this photo, it is likely that the handset may come with 16:9 aspect ratio. The price of the Sony Xperia XZ2 is approximately $792.

Though, must of the leaked info are speculated, we are sure that the Sony Xperia phone will be launched at the Mobile World Congress, MWC, in Spain this February.