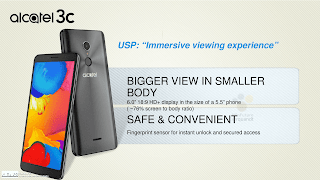 The rear view showed single camera with flash, including a fingerprint scanner and the Alcatel logo. There is also a single camera at the front, a flash and a proximity sensor. The rear camera is 13MP while the front view camera is 8MP.

It will run on Android Android 7.0 Nougat. The aoc is Mediatek MT8321. It also has a battery size of 3,000 mAh. With respect to its internal memory, 1GB RAM and a 16GB ROM will be included. The price to be around 120 Euro. The released date is yet unknown.