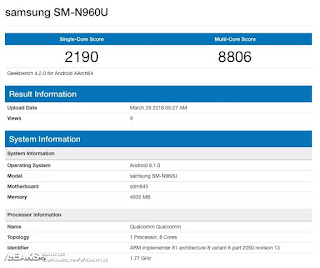 Samsung Galaxy Note 9 basic specs was posted on Geekbench. Late last year, Samsung launched the it’s flagship note smartphone, the Galaxy Note 8. Samsung is coming up with the Note 9 this year and it may be launch around August to October.


The Geekbench reported the Samsung Galaxy Note 9 with a Qualcomm snapdragon 845. Its also stated a 6GB RAM for the note flagship. There will be a octa-core processor for the smartphone. Plus a 1.77GHz processor running on a 81 bit architecture.

A single-core score of 2190 and a multi-core score of 8806 was giving to the Plablet by benchmarker. Geekbench marking for the Galaxy Note 9 was posted on 28 of March 2018. A onscreen fingerprint sensor is expected to be a important feature for the Samsung incoming Note 9 flagship. Also, a system on chip of Samsung Exynos will be available to continents other than North America. America’s cipset will be the aforementioned Qualcomm Snapdragon 845.