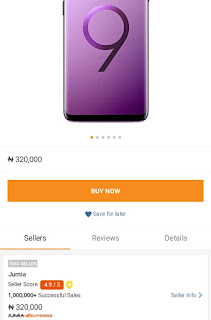 
The Huge sales may have been due to the low price tag for the gadget. 320,000 naira was attach as a result of a seasonal promotion Jumia held during last week known as Jumia Mobile Week. Previously Naijatechguide said that the sales of smartphone from Jumia Mobile Week was above 10,000 in volume.

The Jumia Mobile Week which begins on Monday, March 19 ended on Sunday March 25. Many smartphone price was slashed down and there were coupons which was used to buy goods that was more than 30,000 naira.