As you will see from the photo below, revealed by AT&T, the phone has the a list number SM-G892A model number, a FCC ID A3LSMG892A, Samsung name on top and the AT&T logo at the bottom. The device will have a camera, flashlight and a fingerprint scanner at the back of it. 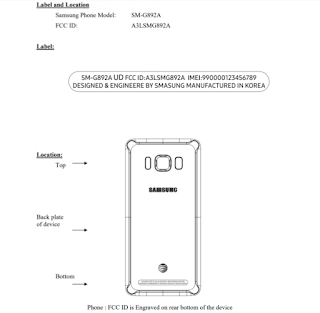 Though, it was not stated what the mega pixel S8 Active will posses, it is possible that it will have a 12MP rear camera and 8MP front camera which is similar to Samsung Galaxy S8 and S8 Plus. It may also come with a chipset from Qualcomm Snapdragon. And an Android Operating system of 7.0 Nougat.

Gossips around the internet also shows that the device may have the same water resistence quality like its predecessors. A resolution of 2008 x 1080, the screen will be 5.4 inches HD screen, a memory of 4GB RAM, internal storage of 64GB ROM and an removeable external storage of up to 256GB.

If the gossip is true, the phone will be similar to other Samsung S Active series and it will be getting ready to be lunched this year.