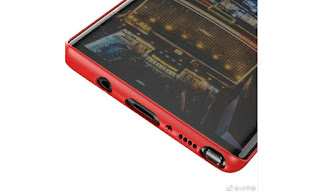 Rumours is rolling out daily on the new Galaxy Note 8 which will replaced the Galaxy Note 7 that caught fire early this year. A photo of the Samsung Galaxy Note 8 that was spotted on the web unveil some external features of the upcoming Samsung Note series.

As you can notice from the photo up here, you will see that the device will come with a 3.5mm audio port, USB Type-C port, the Samsung S pen, and stereo speakers.

The features provided in the photo is quite similar to that of Galaxy S8 that was lunched in April 2017. So, it is possible for the new Samsung flagship phone to come be water resistance and has bixby built-in app.