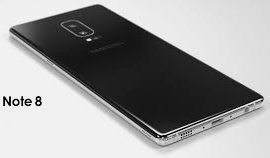 Samsung mobile may be lunching another Galaxy Note in the second half of this year. You may recall that late last year and early this year Samsung Galaxy Note 7 was repeatedly caught fire during charging of the battery.

As a result, critics has considered that Samsung may not manufacture anymore Galaxy Note phones. However, from news gathered from the internet, Samsung will launched its Galaxy Note 8 flagship phone to add to the Galaxy Note Ecosystem.

Rumours around the web has revealed that the phone is likely to be lunched in September 2017 since it is that month Samsung usually released its’ Galaxy Note or possible August 26, 2017 so that it could compete favourable with iPhone 8.

Samsung may likely sell the Note 8 for the price of $1,000. If so, it will be the first time Samsung is selling its’ Galaxy Note series on a round figure.

Some of the specifications expected to be found in the device may be similar to Galaxy S8 released April 2017. They are: