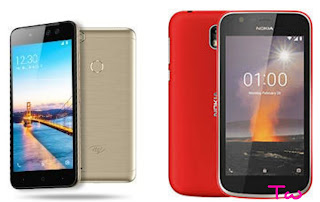 Nokia 1 and Nokia S12, which of these should you buy? Here is my take on both Android low range smartphones. But before that, you should know these. The Nokia 1 was made released in Nigeria in 2018 while the Itel S12 was released in 2017. Let’s go there!

Screen Size The diagonal of the screen on Nokia 1 is measured as 4.5″. However, Itel S12 measures 5″.

Battery 2150 mAh removable battery for the Nokia 1 smartphone and 2400mAh for the Itel S12 mobile.

Network Nokia 1 is happy with a 4G LTE ability. The Itel S12 is comfortable with a 3G network.

Which will You choose

Nokia 1 advantage is on its 128GB external memory and 4G LTE along with a comfortable size of 4.5 inch screen. Nokia 1 is small, you can easily fit it into your pocket without any discomfort. And finally, an OS of Android 8.0 Oreo, which is the current operating system.

Itel S12 has its own major advantage. Its Mediatek is Better, 8MP front camera, dual rear camera, good battery size of 2400 mAh. If you love big screen then the Itel S12 may be right for you. You may also prefer the internal memory of 16GB especially if you have no intention of buying a memory card.

So the choice is yours!