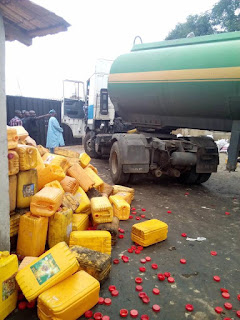 The Standards Organisation of Nigeria in close collaboration with the Department of State Services (DSS) in Ondo State on Thursday busted a syndicate that specializes in repackaging and rebranding of suspected substandard vegetable oil in Akure, Ondo State.

A truck load of suspected substandard vegetable oil, thousands of jerry cans of different capacities and popular brands as well as two surface storage tanks of about 15,000 litres capacity each were some of the items recovered from the illegal factory situated along Irese Road, near Orange FM station Akure, he said.

Speaking on behalf of the Director General Mr. Osita Aboloma, the SON Coordinator in Ondo State, Engr. Paul Oke said the apprehension of the syndicate followed the receipt of classified information from concerned Stakeholders in the State.

Engr. Oke said further that the Organization leveraged on the existing robust collaboration with the DSS to carry out surveillance activities that led to the eventual arrest of the leader of the syndicate, one Okwuchukwu A.

Preliminary investigations according to the SON State Coordinator revealed that the suspect had no evidence of company registration.

He disclosed that samples of the suspected substandard vegetable oil have been taken for laboratory tests and analysis while the truck and suspect are in custody of the DSS for further investigation to apprehend other collaborators and the source of the consignment in the truck.

Engr. Oke reiterated the Director General’s resolve to ensure that the perpetrators of substandard products distribution will face the full weight of the law by being prosecuted under the SON Act No. 14 of 2015 once investigations are concluded.

READ ON  GOOGLE TO USE TECHNOLOGY FOR THE UPCOMING U.S ELECTION
Powered by Inline Related Posts

He encouraged Stakeholders in Ondo State in particular and the Nation in general to continue to support SON and other regulatory and security agencies with useful information. “Endeavor to report unwholesome acts relating to the distribution of substandard products in the interest of the populace and the Nation’s economy”, he charged.
Source: SON