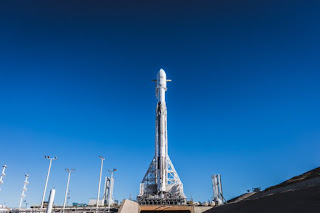 Space X is preparing to launch Falcon 9 and PAZ tomorrow. Time of launch will be at 6:17am PST and 14:17 UTC. Space X is 90 percent sure of favourable weather condition during launch time.

Space X had successfully carryout space rocket launch and landing on previous  Falcon launch. The founder, Elon Musk was mocked when he said he will transport humans to space. After unsuccessful trials the company finally get things right.

Falcon 9 and PAZ are vertical on Space Launch Complex 4E at Vandenberg Air Force Base in California. Weather is 90% favorable for tomorrow’s launch at 6:17 a.m. PST, 14:17 UTC. pic.twitter.com/bL1VjHmIhV

Earlier, the Falcon 9 and PAZ launch was scheduled to be on 18th of February, but due to certain conditions. The rocket launch will be done in Vandenberg Air force base in California, USA.