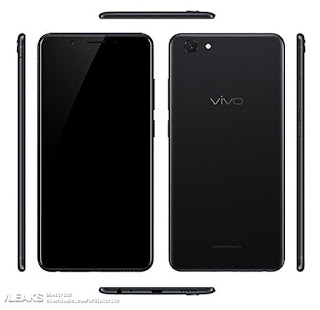 Vivo smartphone named Y71A will be launched in a month time. May 4th is the precise launch date reported from a source. Furthermore, certain specifications on it have been unveiled by several sources. The photo leaked out, is a black Vivo Y71A, shows the 360 renders of the smartphone.

One spectacular feature on the photo, is the location of the earpiece port. This is located at the bottom of the Vivo Y71A. Other features you will notice are the USB port, loudspeaker and the microphone. The top edge has no useable feature.

The front view revealed no flashlight for the front camera. However, the back view has a single camera. The camera sizes are 5MP and 13MP for the front and rear view respectively. The Vivo logo name is clearly displayed at the back.

For the battery, a 3285 mAh battery capacity, non removable, is inserted into the rear area of the Vivo Y71A smartphone. The Qualcomm Snapdragon is not impressive. As it will be backed with a chipset of Snapdragon 425. However, a RAM of 3GB and a memory space of 32GB may cover for the system on chip. The Vivo Y71A will be powered by an Android 8.1 Oreo. Finally, the retail price should start from 1098 Yuan.