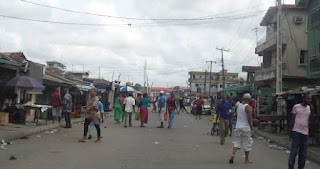 Mr. Ambode, the Governor of Lagos state has task youth and entrepreneurs to use the opportunity of the N25b Employment Trust Fund, ETF. He said that N6 billion is to be made available each year and Art Theatre and a Cinema will be built in Igando, Ikorodu, Ikeja, Lagos Mainland, Badagry and Epe to give greater opportunities to  the youths.

Governor Ambode, who stated this in Agege while flagging off the One Lagos Fiesta, an annual end of the year revue put together by the State Government, said the ETF was specifically designed by government to create greater opportunities for the youths to be gainfully engaged and contribute meaningfully to the growth of the State.

The Governor said over N6billion has already been earmarked to be disbursed annually through the ETF initiative, and that about N1billion of the fund will be pushed to the Agege division.

“We have earmarked over N6billion and we intend to push N1billion to this particular division. So, it is left for all of you to bring out your best. Whatever it is that you are doing, if you can’t get a white collar job, the ETF is there for you to help promote your business,” the Governor said.

While expressing the resolve of the State Government to use entertainment, arts and sports to promote tourism in the State, the Governor assured that his administration will continue to open up the tourism potentials of the State with the view to getting the best from the youths.

To this end, the Governor said by 2017, government would construct an Art Theatre and a Cinema in Igando and also build five new Theatre Arts in Ikorodu, Ikeja, Lagos Mainland, Badagry and Epe to give greater opportunities to  the youths.

He, however, urged the people to remain peaceful and shun any criminal activity.

Explaining the rationale behind One Lagos Fiesta, Governor Ambode said it was a way of creatively engaging the youths to bring out the best in them, saying that the 2016 edition was arranged to be better, bigger and bolder than that of 2015, adding that a total of 40 shows would hold simultaneously for eight days in Badagry, Epe, Ikorodu, Agege and Victoria Island.

Earlier, Speaker of Lagos State House of Assembly, Mudashiru Obasa commended Governor Ambode for the initiative, especially for flagging it off in Agege, saying it was a thing of joy that people could have the best of fun in the area without having to travel to a far place.

He urged the people to maintain peace and say no to all forms of criminality.

“We are not just here to dance, we must take advantage of this fiesta to promote and advance the economy of Agege. We have to use this opportunity to showcase the good side of Agege to the world and as such, start thinking of what you can sell to the world. Let’s make this a world event that people will be looking forward to attend,” the Speaker said