Tecno finally launched, it Tecno Camon CM on the 9th of January instead of 8th as posted on twitter. On the launched of the smartphone and among other things, tecno stated that the device will be available on 15th of January 2018.

Tecno also mentioned that pre-order is available from 10th of January to 14th of February. 3CHub, a smartphone dealer in Nigeria, is the authorised dealer to sell the Tecno Camon CM. You should know that pre-order sales have already began.

READ ON  Huawei is leaving the US Market. Probably for Good
Powered by Inline Related Posts

Among other things, the Tecno Camon CMore will comes in three colour variants. Champagne Gold, Midnight Black and a third colour that wasn’t I didn’t get clearly. 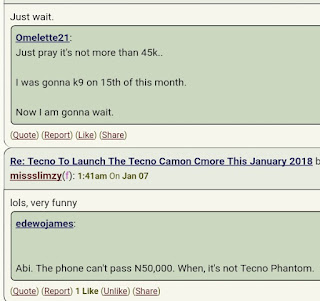 When it is released, Tecno will sell the phone for N46,000. Exactly, what I said on Nairaland, that the Tecno Camon CM can’t be sold for more than N50,000. The phone’s aspect ratio is set at 18:9, its also comes with 3000 mAh battery capacity and the screen is regarded as full view, meaning there is very little bezels on the smartphone.

It was amazing that the Tecno Camon CMore was launched in Nigeria. This is the first time a phone will be launched in this country!