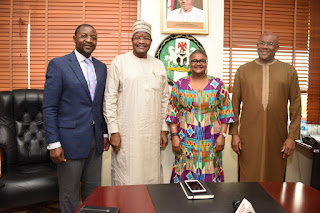 The Telecommunications industry contributed N1.5 Trillion, for the second quarter, to Nigerian Gross Domestic Product, as posited by NCC Executive  Vice Chairman and CEO, Prof. Umar Danbatta. This represent 6.68 percent increase if compared with the first quarter of this year of N1.456 Trillion.

He stated this while speaking to Madam Angelique Weeks, the chairperson for Liberia Telecommunications Authority, LTA. “We are very proud of the remarkable contribution the sector is making. Even at the recent times when the whole economy was facing challenges, the sector had remained resilient and stable,” speaking to the visitor who was accompanied by a team of administrators from West Africa Telecommunication Regulators Association (WATRA).

He also said that the commission plans to increase broadband penetration from 21 person this year to 30 percent in 2018. He further “expressed optimism that the country would undergo a massive ICT transformation by the time the excess data capacity at landing point in Lagos is deployed to the hinterland when the licensing of Infrastructure Companies (Infracos) is completed.”

The NBS’s report has confirmed that the telecommunications sector, during the second quarter of 2017, contributed 9.5 per cent to the GDP in contrast to 9.1 per cent contribution in the first quarter of the year.