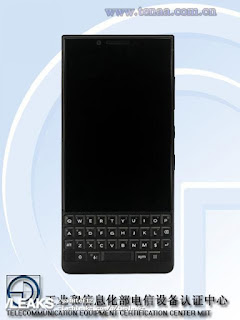 Tenaa has reported the BlackBerry Anthena, BlackBerry next smartphone taking over from BlackBerry KeyOne. The photo is similar to the one leaked early this month and BlackBerry is not letting go the QWERTY keyboard.

The previous leak photo looks more of a schematic photo than real. But the photo above coming from Tenaa revealed the true nature of the BlackBerry Anthena. As black as it were, the Antenna flagship will still maintain a 3.5 mm earpiece port, I wish it were removed. In all, remember that this is a leak and may note really reflect all the features of the upcoming BlackBerry Anthena.