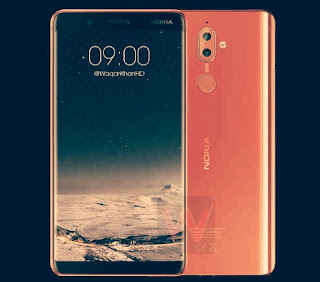 Nokia 9 is coming! And it seems it will be Nokia flagship smartphone, a Phablet and also take over Nokia 8. There have been so many leaks so far for the Nokia 9. And below, I will be trilling you with them. However, I doubt if Nokia is ready for the latest trend in Mobile phone technology because, the leaks so far do not reveal any latest mobile tech except for bezel-less screen. Well, we will know when Nokia finally launched the Nokia 9. Here are the leaks so far.

The phone will be a bezel-less smartphone as said earlier and as supported by the leaked photo. If it is so, the Nokia 9 will be Nokia first less bezel smartphone. Ofcourse, Nokia will be going of Qualcomm Snapdragon as its chipset, if it will compete with Samsung, Apple and Google pixel. The Snapdragon 835 hardware will be inside the Nokia 9.

Some leaks claimed that the operating system is Android Oreo. However another leak which is more recent claimed Android Naugat. Nokia, at the time of Google launching Android Oreo, said all its device will be updated to Oreo. So, I will be expecting Android Oreo for Nokia 9 Phablet. Unless, Nokia plans to released another flagship smartphone this year probably Nokia 10.

More to that, the gadget will have 3800 mAh battery capacity. 22MP for rear camera and 12MP front facing camera. To me, Nokia will be making a lot of mistake, if the rear camera is not dual cameras. Dual cameras are here to stay and if Nokia want to stay fit, it should also implement it. Yes, Zeiss optic camera technology will be in Nokia 9.