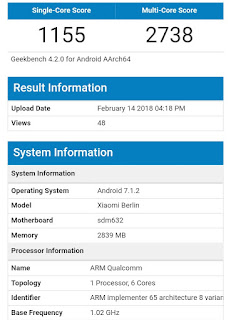 It may interest you to know that a new brand of Xiaomi smartphone is on the off line. The Xiaomi Berlin. Probably, it may also be the code name of the smartphone. It is likely that the Xiaomi Berlin may be the Xiaomi Redmi 5 which had been reportedly rumoured for a while now.

In any case, Geekbench revealed the benchmark for the new Xiaomi smartphone as mentioned. The single-core score for the Xiaomi Berlin was stated as 1155 while the multi-core score was put at 2738. The report was uploaded on February 14 of this year.

It will flaunts the Android 7.1.2 operating system. Geekbench report revealed that the Xiaomi Berlin will use a system on chip from Qualcomm. A Snapdragon 632. It is expected to have a internal memory of 3GB RAM, a single processor with 6 cores, 64 bit architecture and  a base frequency of 1.02 GHz.

From the forgoing, it is needful to say that the use of Android 7.1.2 instead of a latest Android 8.0 Oreo is no ideal, though not bad especially if the smartphone will be a low level one. Furthermore, stating that the phone will have 6 cores in a chipset of Qualcomm Snapdragon 632 is odd. This is so, as the Snapdragon 632 is known to use 8 cores for its CPU.