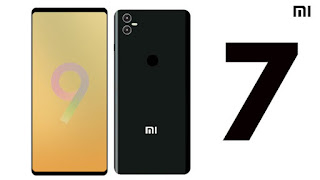 A close look at the flagship from Xiaomi shows a similar design to the Samsung Galaxy S9 which is likely to be launched before the first half of 2018. If Xiaomi launched their flagship phone before Samsung does theirs, it will be seen as a good move. Since Samsung is a top competitor, launching theirs first will help increase sales before the giant Samsung hit the market with Samsung Galaxy S9.

The Xiaomi flagship screen is bezel-less, a common feature in almost all flagship smartphone recently. It has a single camera of 16MP in the front face and a dual 19MP + 19MP cameras plus a flash in between the cameras, at the rear face of it. The phone comes with a fingerprint scanner at the rear. The front view has no button.

In addition, Xioami Mi 7 will be among the devices that will first come with the new system on chips from Qualcomm that is incorporated with an Artificial Intelligence, AI. That is the Qualcomm snapdragon 845.