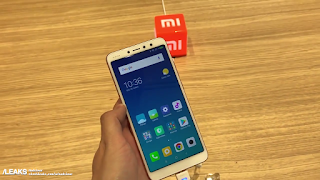 Probably Xiaomi may be preparing to lunch a new smartphone later on this year. This time is the Redmi S2. The basic hardware components of the Redmi S2 as well as its software was leaked yesterday and made available online.

The Redmi S2 screen size is debuted to be 5.99 inch. The chipset was reported to be Qualcomm Snapdragon 625. Though, the nature of the CPU wasn’t stated, it’s probably a octa core CPU or at least a quad core variant.

Another available leak was the camera. The rear area of the Redmi S2 will be two cameras. The flashlight as can be noticed from the photo is in between the two cameras. Though,  the front camera will be 16MP sensor, the two rear cameras are 12MP and 5MP sensors. A purported battery size of 3080 mAh was also mentioned.

Before, I let go, the Redmi S2 also as an internal storage RAM of 3GB plus a 32GB ROM. With the information regarding the memory, it is likely that the phone will fall within the middle range price. You should also expect an Android 8.1 operating system.